Approaching the Heart Sutra in terms of space: the six sensory organs, the six objects, and the six consciousnesses.

The 18 realms, which encompass all the physical and psychological phenomena, including our life, are actually empty in essence.
at December 13, 2020 No comments:

Be Mindful When Walking

Its the monsoon season in Singapore, with bright sunny weather in the morning and heavy rain in the afternoon.

Recently I noticed many snails being squashed flat by people on the pavement. I think it's good to be mindful when walking and be careful not to step on the snails who are out of the wet muddy grass. That's why whenever I walk, I will look ahead and try to avoid stepping on the snails. Sometimes when I see them in the middle of the pavement, I will just put them on the side of pavement. Perhaps there should be a signboard to advise pedestrians to be mindful of stepping on snails. 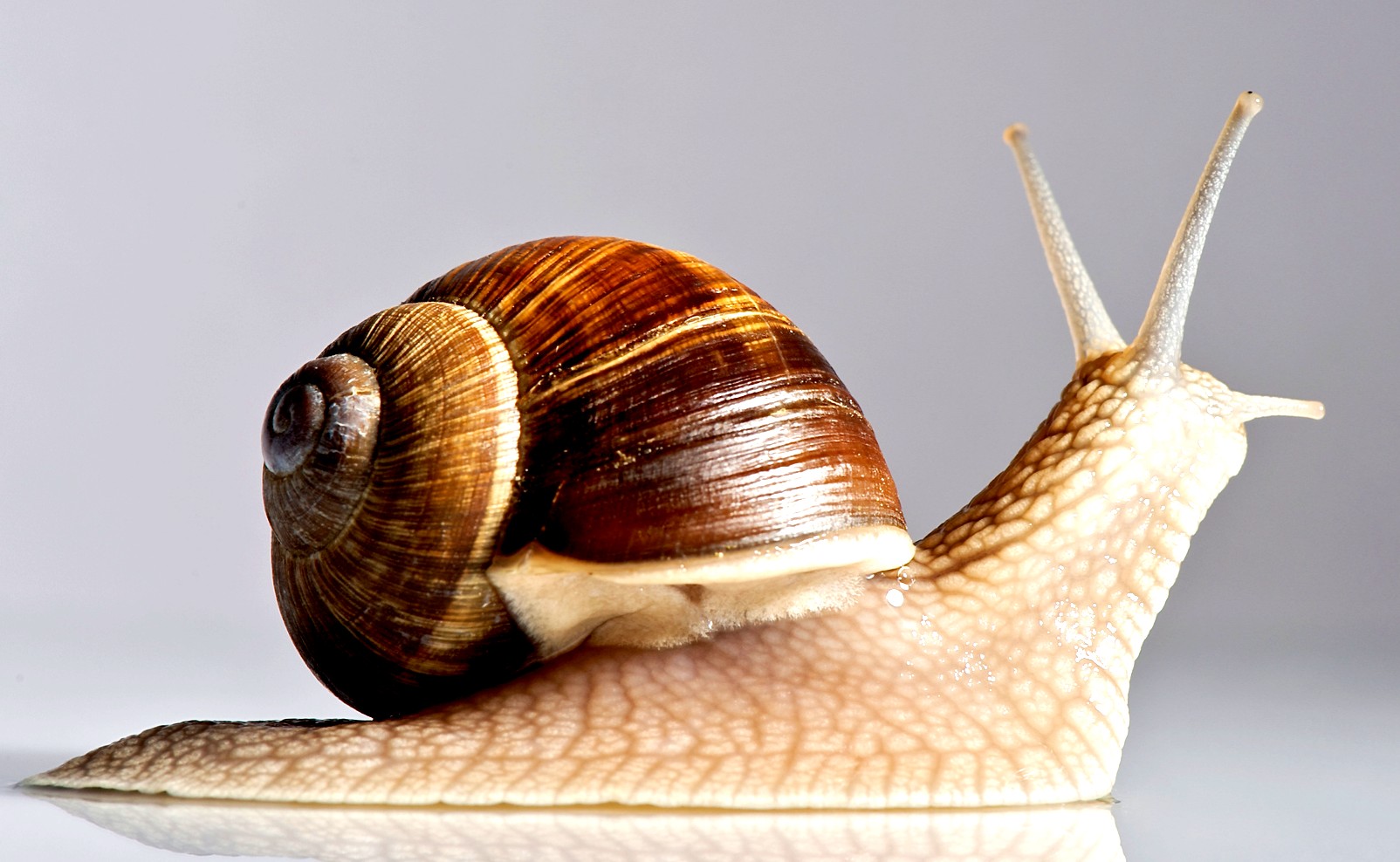 Eliminating attachment by contemplating the causes and conditions

Knowing that things come and go due to causes and conditions, then we won’t have any attachment and distress, and therefore we won’t suffer.
at November 30, 2020 No comments:

When I started this Heart Sutra blog, I was wondering how many posts I could add to the Heart Sutra as it is the shortest sutra with 260 Chinese characters with the version translated by Master Xuanzang 1400 years ago during the prosperous Tang Dynasty in China.

I was so wrong. Even though it is the shortest sutra with only 260 Chinese characters, it has deep and profound meaning. However as one understands the Heart Sutra, one has less worries and just enjoy the moment. One learns to let go and not be too attached to results like gain or loss. Just try your best.

One must learn to control one own's senses. Many people experience suffering as they let their senses control them. For example when someone see something beautiful with their eyes, they want to own it and they feel miserable when they can't. Sometimes I was wondering if the person own the thing or the thing own them. For example, long after the person passed on, the gold or jewellery still exist. 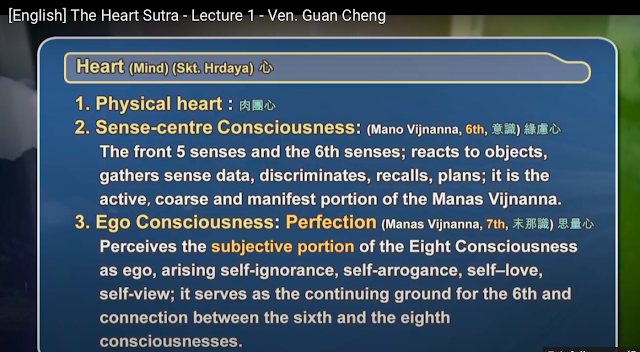 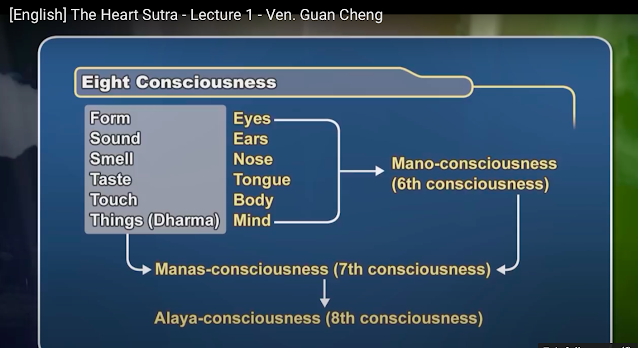 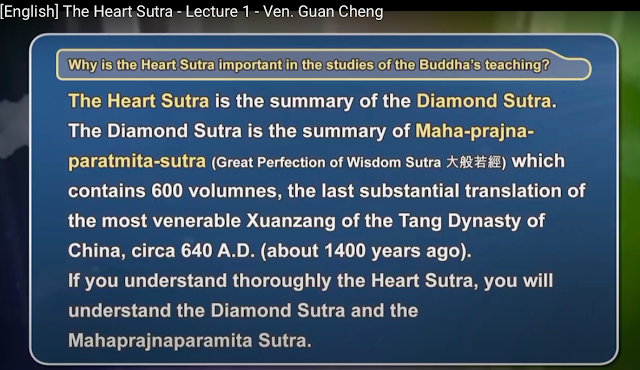 Blessing of Observing the Precepts

Lately I read comments that Buddhism is a philosophy. In my opinion, it is more than philosophy. It is putting into practice what Buddha taught more than 2500 years ago. It is important to observe the precepts, meditate and read the dharma.
Buddha taught about karma which is cause and effect. Good action leads to good outcome and vice-versa. Thus he encouraged lay Buddhists to observe the five precept.
As a lay Buddhist, I observe the five precepts. From my experience, I noticed that when I accidentally break the precept like accidentally hurting an ant, there be some  bad effect. But if I observe the precepts, the day goes by more smoothly. I do agree with Master Sheng yen, that there be blessing when you observe the precepts. What about your own experience?
The Five Precepts
at October 25, 2020 No comments:

Even though the Heart Sutra is the shortest sutra with 260 Chinese characters (translated by Master Xuanzang during Tang Dynasty), it contain the essence of Buddha's teaching. In this video, Master Sheng Yen explained the Heart Sutra in terms of time.

From the Heart Sutra- 无无明，亦无无明尽，乃至无老死，亦无老死尽- There is no ignorance and no ending of ignorance. And no ending of aging and death. This is actually about the 12 links of dependent arising.
Our self in terms of space is made of the 18 realms (six senses, six sense objects, and six types of consciousness that of vision, hearing, olfaction(smell) , taste, touch and mind-consciousness. (十八界）The 18 realms represent the way the mind perceives and divides the world and prevent us from seeing the true nature of thing(unity and equality of thing).
In terms of time, it involves the 12 links of dependent arising which explains the process of rebirth cycle. They are ignorance ⇾ intentional action ⇾ consciousness ⇾ mind and form ⇾six senses ⇾ contact⇾ feeling ⇾craving⇾grasping⇾being⇾birth⇾old age and death. The 18 realms are combinational and changing in terms of space and that there isn't an unchanging and eternal self to them.
As I read and contemplate the Heart Sutra, I have a better understanding of Buddha meant by non-self.  There is no permanent self but one consciousness changes with the change of five aggregates.

The ignorance from life to life brings about volition 行 and consciousness识 lifetime after lifetime and therefore there is consciousness识 going through rebirths one life after another. After consciousness enters the womb, " name and form色". begins and thus another life is started.
One way is to view our present life as a process of the 12 links from birth to death. If one hasn't gain liberation, one will always undergo samsara in the future.

One who has gained liberation will be able to end the continuation of the cycle of birth and death though his past is without beginning.

The suffering of sentient beings who cling to life, will go on and continue until one gains liberation.

Once we enter the womb because of ignorance, volition starts immediately. Attachment to the self is already there and has started.

After volition and consciousness, comes name 名 and form 色. Name refers to karmic force or a person's eighth consciousness. The seeds accumulated through karmic force are referred to as the name. Form refers to the mother's egg and the father's sperm. The union of the two is called "form" which is already material something inherited from the parents as an embryo. By the stage of name and form after entering the womb as the foetus will come into being.

And then comes contact. It is said that the foetus can hear after five or six months. Also it has sense of touch and begins to swallow amniotic fluid and pass it as urine.

Grasping 取means the desire for good things. For example, a foetus will want to eat and so does a newborn baby.

So craving conditions grasping which then condition existence 有。In the process of craving and grasping, we create karma 业.and then existence follows on from that. Existence of causes for the future. The force that forms the cause for the future will than be in existence. With its existence, consciousness will form. And this consciousness will enter the womb for the next life.
By creating karma, one will receive the karmic result and has to receive the karmic result from birth to death. This is the 12 links of conditioned arising in a lifetime.

18 realms (十八界）眼界（eye)、耳界 (ear)、鼻界 (nose)、舌界 (tongue)、身界 (form)、意界）(consciousness)，作为认识对象的六境（色界、声界、香界、味界、触界、法界）和由此生起的六识（眼识界、耳识界、鼻识界、舌识界、身识界、意识界.
The 12 links of dependent arising can apply to the complete circle of a life, starting from the consciousness entering the womb until death.
Craving and grasping foster our attachment, and therefore forms the karmic force that will bring us to our next life in the circle of birth, aging, and death. 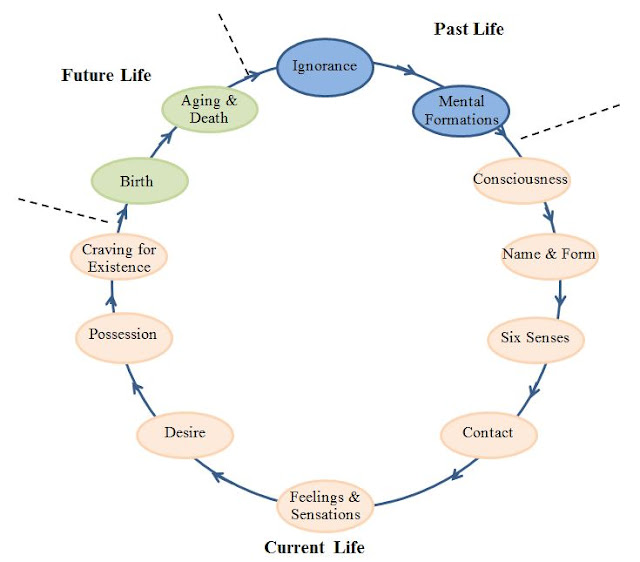 This video is about Venerable Master Xuanzang's life and Buddha's teaching sharing by some commentators. If you understand Mandarin, you can watch this video. There are seven episodes. 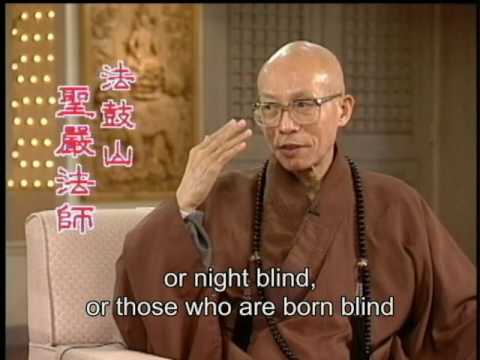 Both the self and all phenomena are without independent existence or inherent, fixed characteristics. They are impermanent, mutable and mutually dependent their individuality is in appearance only.

It is the nature of all conditioned to arise, persist for a while and then pass away. Investigate the impermanence of all conditioned phenomenon. For the tears of beings wandering through the samsara are beyond measure. One who is still attached to form, sound, taste, smell and physical sensation cannot find liberation from this world.

External treasures bind one to the round of birth and rebirth on the wheel of samsara. Better to give the noble treasure that is the most excellent internal treasure into the worldly wealth.

The purpose of this blog is to share what I learnt on Buddhism. 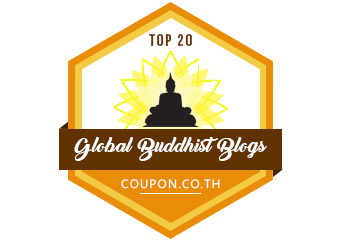 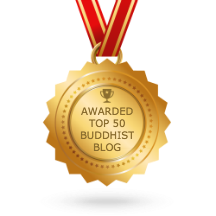 Both the self and all phenomena are without independent existence or inherent, fixed characteristics. They are impermanent, mutable and mutually dependent their individuality is in appearance only.